In our book The Gallipoli Oak we carry a picture of members of the survivors of Eric Duckworth’s platoon of the 1/6th Battalion Lancashire Fusiliers at their annual reunion at Rochdale Town Hall in 1938.

The picture (below) shows the teenager’s mother, who is Mayor, along with the veterans.

Here we also include a list of names and addresses of the men who attended the event. 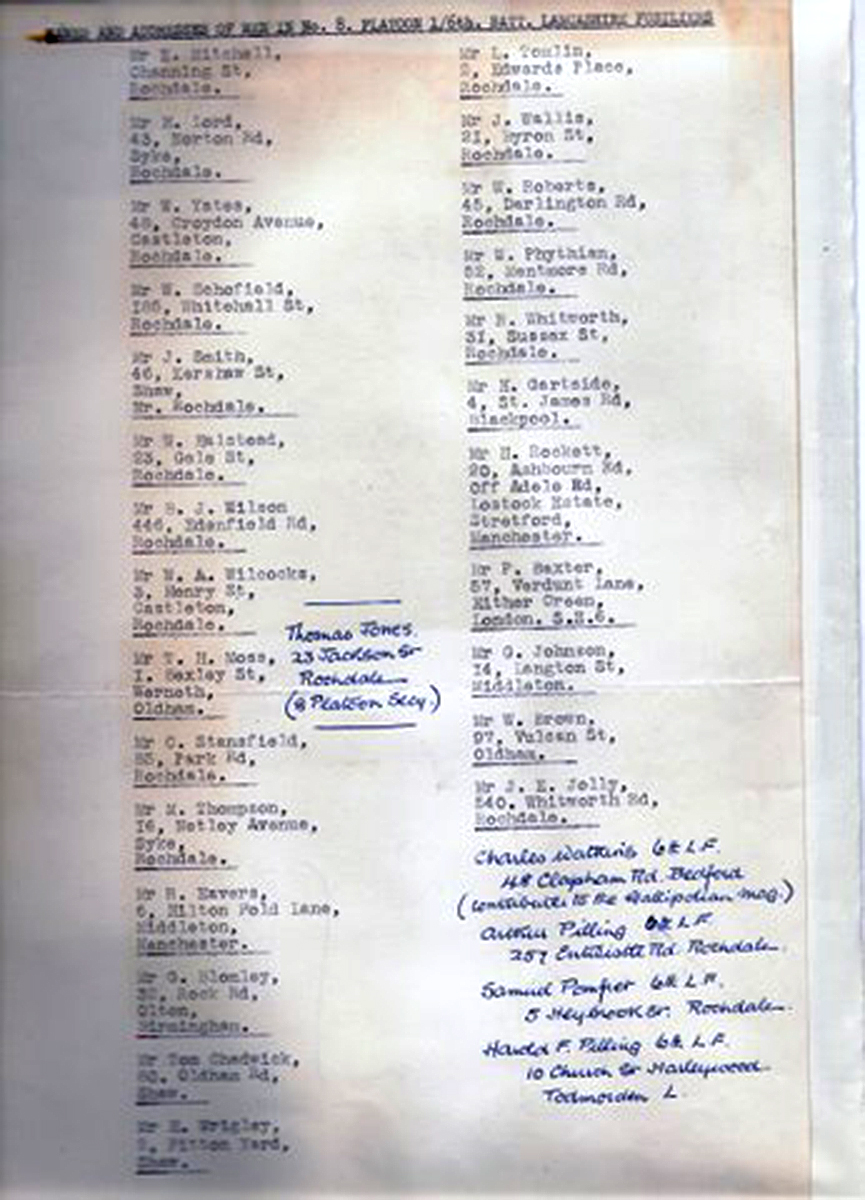 It is also interesting to note [see the newspaper articles below from the Rochdale Observer] that survivors of the 42nd East Lancashire Division’s actions at Gallipoli started holding commemorative services to mark their losses on the Peninsula while the First World War was still ongoing. Of course the town of Bury in Lancashire, the home of the Lancashire Fusiliers, continues to hold an annual Gallipoli Day every April: an event that is very well supported by both the Armed Services and the general public.

2nd Krithia Remembrance: The Rev Dennis Fletcher, the former vicar at Rochdale Parish Church and Army Chaplain to the 1/6th Lancashire Fusiliers, wrote on May 7th to the local newspaper to say: “I think your readers would like to know that the anniversary of the day on which our Brigade [the Lancashire Fusiliers’ Brigade of the 42nd Division] first entered into action on the Gallipoli peninsula was observed here yesterday and today. The wish was expressed by several that some form of service should be held to mark the day, so the chaplains in the Brigade drew one up. The service was held in the open air yesterday morning at 11 o’clock (May 6) and some 250 officers and men were present. The divisional band played at the service, which took the form of a thanksgiving for the glorious deeds done by the Brigade a year ago. We also remembered in the special prayers those members of the Brigade who gave their lives on that occasion, and prayer was offered for the relatives of those who fell. Concerts were held in the various battalions in the evening, and the officers of the 6th battalion [Lancashire Fusiliers] visited the sergeants’ mess and Major Sampson presided and Sergeant Major Metcalfe proposed the health of the officers. In the absence of Colonel Lees, who is having a well-earned leave in England, Captain Lennard suitably replied.”

3rd Krithia Remembrance: “A number of local territorials, many of whom are recuperating at Heaton Park, took part in ‘Gallipoli Day’ in Manchester on Monday – held to mark the anniversary of the [3rd] battle of Krithia. The troops paraded at Belle Vue and there was a march past in Albert Square. The salute was taken by Lieutenant General Sir W.P Campbell, the GOC Western Command. The party at base included Lord Rochdale and The Mayor of Rochdale, Councillor Turner. Among the officers on parade were captains R.W Leach, J.S Lord and Second Lieutenant P.A Jones of the 1/6th Battalion [Lancashire Fusiliers].”