In The Gallipoli Oak we mention that the parents of Second Lieutenant Eric Duckworth, on receiving the news that their eldest child had been killed during the Battle of the Vinyard, began immediately writing letters to his fellow officers and comrades in a bid to get as much information as they could about the last minutes of their son’s life. We included in the book some of the contents of a letter that was sent to them by Private Norman A Howarth, who was in Eric’s platoon and close to the teenager when he fell. Here we provide the communication he had with the Duckworths in full – including a sketched map he draw for them in case they should ever decide to visit the Peninsula. It is this sketch, we believe, that they had pinned many of their hopes upon in their mission to plant the tree sapling in 1922. When we last went to Gallipoli we used this sketch ourselves and found it is still a great help in pinpointing the spot where Eric was last seen slumped amid the Turkish wire…

I am sorry that I have been so long in answering your letter but many things have interfered with the answering of your letter. I was brought to Rodden Court on October 1st, because room had to be made at the infirmary for the wounded from France and my wounds are healing.

I rode in a carriage for half and hour yesterday and I felt much improved. I am toddling about at last and I like this place very much. I hope you will excuse many things because this was written in bed, but if there is anything else you would like to know I shall only be too glad to answer you and help you anyway I can.

Hoping that my answers meet with your satisfaction,

I remain yours sincerely,

Dear Sir, I think I can answer your questions better if I tell my story from the beginning to the end.

It is rather difficult to describe the exact position where your son fell on August 7th because I had no map, but we went up to number eight communication trench and on reaching our firing line we turned to the left for about 200 yards. Your son fell about 300 yards in front of this position. If you wrote to Major Lees he would be able to tell you the exact position we were in on August 7th at 9.30am because he has the maps and details. I don’t think any building was in sight when we advanced but I just caught a glimpse of a little ridge to our right.

At 9.45am, our platoon charged for the second Turkish trench, each man was told beforehand that he was to jump over the first turkish trench and take the second trench, but many in our platoon were just out from home and they halted at the first Turkish trench and took up a firing position behind the parapet alongside the men of A Company who had charged the first trench at 9.30am whilst the men of the original 6th charged over the first line. I could only see about 20 men charging but we kept on but only three reached the parapet of the second Turkish line, these were your son, Private Porter and myself.

Private Porter was about 10 yards to my left and he and I were busy shooting any Turks who were near us. Private Porter crawled nearer to me and told me that Lieutenant Duckworth had been shot dead in the chest just as he reached the parapet of the second Turkish trench. When the smoke and dust lifted a little I saw your son about 30 to 40 yards to our left and he was sat on the parapet with his head on his chest and in a dead looking position. All the time the Turks were shelling us and things were looking bad for us.

We had not been at the trench very long before Porter and I saw a large force of Turks crawling down a communication trench intending to take our fellows in the rear. It was impossible for those holding the first captured line to see these Turks, so Porter and I determined to risk crossing the open again and warn them. We both ran towards the first trench but Porter had only gone 20 yards when he was killed, but I managed to be missed until within five yards of the first line, then I got hit in the abdomen and hip and fell into the trench. I thought our fellows were in this trench and was much surprised to find several Turks in the trench. One Turk clubbed me on the head with his rifle but a sand bag broke the blow, whilst some other Turk rammed his bayonet into my neck. All this seemed to happen in a few seconds.

When I recovered my senses I found that our fellows had jumped into the trench and killed the Turks. I told a Lance Corporal what I had seen and word was passed down to some officer. They had not been in the trench five minutes when word was passed down that they must leave the trench because it was mined, whilst the Turks were enfilading them from the left. I had to be left and the Turks came down the trench – at this time I was robbed and trodden on until my senses left me again. I was in this trench till 5.30pm, when the Turks rushed out of the trench – ten minutes afterwards the bomb throwing party belonging to the Eighth Lancashire Fusiliers came upon me and carried me to our original firing line. The Eighth Lancashire Fusiliers had sapped into this trench from our original firing line. I laid in the firing line till late at night and whilst lying there I received shrapnel wounds in the head and arm. A rescue party was sent for me and I was carried into the support trenches.

Lieutenant Duckworth could not be reached because he was in such a bad position and on the Turkish parapet. Our forces were only just able to keep the Turks back, but I think we kept the trench. I last saw your son at 9.55am and he was still in the same position as I have before described, but I cannot tell what happened to him after that time but he was right in the middle of the Turkish fire from machine guns and their big field guns. Nobody could live in such a position because he was a target due to his officer’s clothes.

Lieutenant Duckworth was well liked by his men in Egypt, but when we went on active service he became one of us because he thought a lot about his men and the men thought a lot about him. He proved himself on the battlefield as a brave officer and the men had the fullest confidence in his leadership. I am speaking for myself and for the men under his command when I say that your son was all that an English officer was expected to be and you have need to be proud of him as the men of the 6th are. His loss will be greatly felt by all, but he died like a man.

1.  When we charge a trench we always line the parapet first because of mines, then if all is clear we occupy the trench.

2.  No wounded man must be attended to by the men when advancing. This is a hard rule but it must be carried out.

4.  The rough sketch will perhaps help you to understand my story better.

A. Position of Lieutenant at 9.30am on august 7th

B. Position of Lieutenant at 9.50am

C. Position of Private Porter at 9.50am

F. Position of myself from 5.40pm till late at night

G. Sap made by Eighth LF

The Sketch by Private Howarth 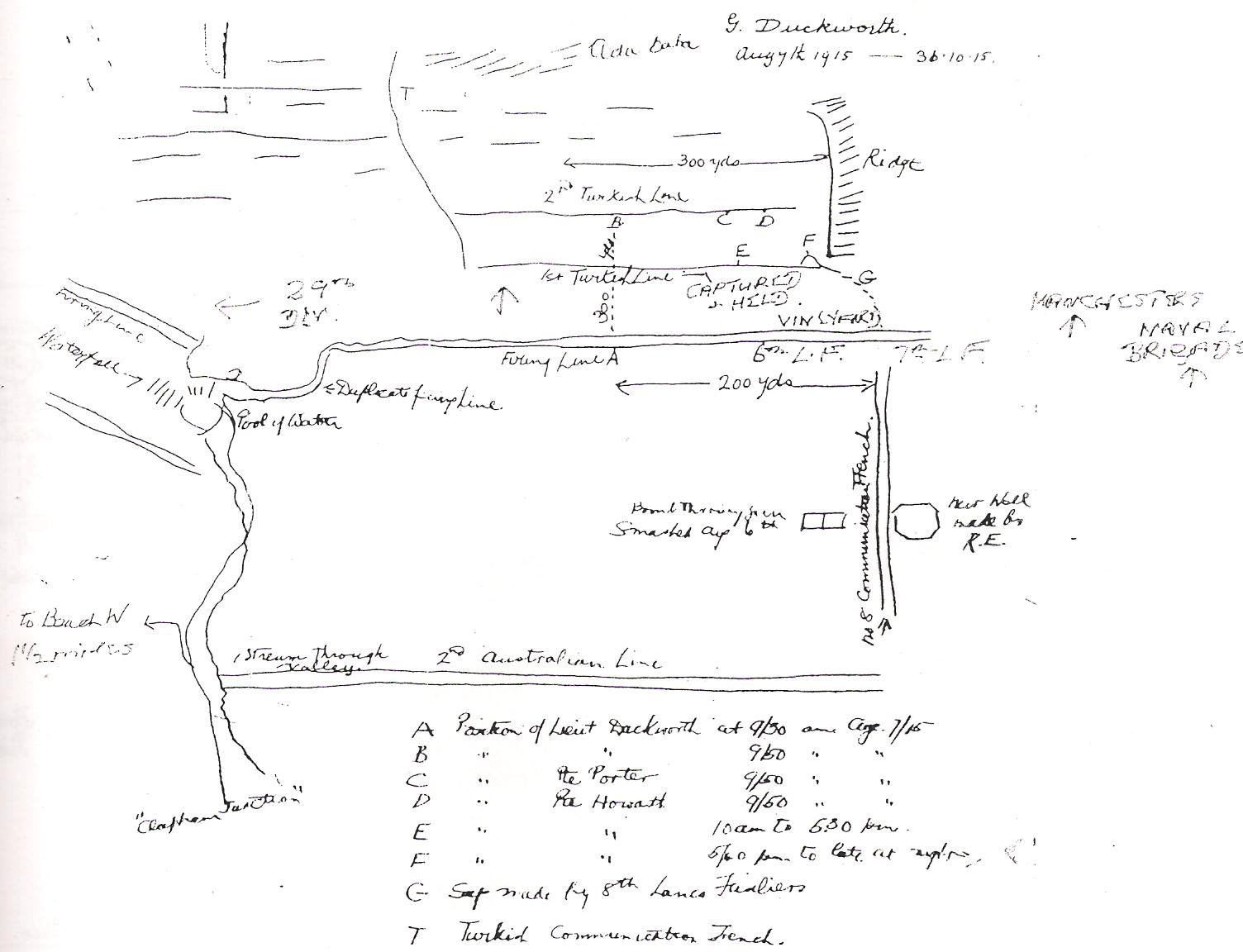 A view of the ground today from the 1/6th trenches: the vineyard would have been at the tree line in the picture